Breaking down the safety's fourth-quarter interception return for a touchdown

Cardinals put the pedal to the floor in the second half of Sunday night's 40-17 win over the Eagles, scoring 20 straight after intermission. Safety Deone Bucannon punctuated the dominant stretch with an interception return for a touchdown on the first play of the fourth quarter. It was his first career interception and gave the Cardinals their biggest lead of the game at 37-10. Bucannon finished the contest with a team-high 11 tackles in addition to the key pick. Bucannon, inside linebackers coach Larry Foote and Eagles quarterback Sam Bradford talked about the play in this week's edition of Cardinals Film Room.

Foote lays out the coverage responsibilites for Bucannon and Kevin Minter on running back Ryan Mathews and tight end Brent Celek:"It's just two-on-two basically. My side, your side. If they both go out the same side, (Bucannon) will take the widest and Kevin will take the inside."

Bucannon's coverage wasn't dictated until the play began to unfold: "We talked about that before they snapped the ball. Depending on what the alignment is, and that time we said, 'Banjo.' We worked off wherever they go. The back stepped out so that's why I ended up taking the running back and he stuck on the tight end and blitzed."

Since Celek stays in to block, Minter makes a beeline for quarterback Sam Bradford. Foote: "It's called a hug-rush. As he was coming, he saw the inside guy blocking. He went to hug and put pressure. It's man-to-man and he's blocking, so go ahead and (rush Bradford)."

Foote says an underrated part of the play was pressure from linebacker Alex Okafor: "Okafor put the pressure so (Bradford) had to step up. He felt the heat. Then he threw it when the running back wasn't ready."

Bradford has to throw the ball quickly and Bucannon sees its trajectory: "I was reading his eyes. He was looking inside. I think he wanted his running back to do an inside route instead of going outside. I was just watching his eyes, and I was in the right place at the right time. Luckily I guessed right. He threw it right to me."

Bradford puts the blame on himself: "Just a bad play on my part. I just have to find a way to just throw that ball in the dirt right there."

Bucannon easily speeds around Bradford on the return: "You just want to run and get there as fast as you can. That's all I had in my mind – just get there for the team. And I was able to do that. (Getting caught by a quarterback) would be embarrassing."

Foote on the advantage of the college safety playing linebacker: "He's got good ball skills. And then you see on his return, he didn't look like an average linebacker lumbering. He looked like a DB. Man, I played 13 years and I didn't have a pick-six. That's an awesome thing."

Bucannon reaches paydirt: "That was actually the first pick-six I'd ever had. Honestly, that was a great feeling. I'm definitely thankful."

Foote lauds Bucannon for not trying to do too much on the play: "With some of our rules with the hugging, you've got to be careful on the perimeter because you don't want to leave (Mathews) and they can dump him the ball. He was disciplined and did what he was asked to do. It's a good coaching point: When you play within the defense and do the little nuggets, you get a pick-six."

Go inside the locker room as the Cardinals celebrated being crowned NFC West Champions.

Minter deduces that Celek isn't running a route and makes a beeline for quarterback Sam Bradford. Foote: "It's called a hug-rush. As he was coming, he saw the inside guy blocking. He went to hug and put pressure. It's man to man and he's blocking, so go ahead and (rush Bradford)."

Foote says an underrated part of the play was pressure from linebacker Alex Okafor: "Okafor put the pressure so (Bradford) had to step up. He felt the heat. Then he threw it when the running back wasn't ready." 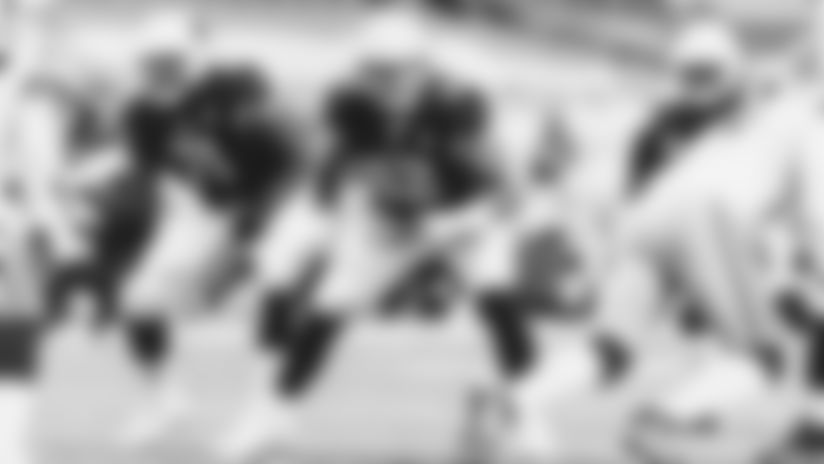 Cardinals Will Have Open Competition For Starting Center Job

Offensive line decisions must be made this offseason

You've Got Mail: What Will Free Agency Look Like?

Topics include J.J. Watt, Fitz's decision and need at cornerback

Important dates for free agency, the draft and other events

New wideout teacher wants to get creative to reach guys like Isabella, Kirk

Duke Slater And The Cardinals' Role In NFL Black History

Team has been first in a number of hirings

Advertising
The browser you are using is no longer supported on this site. It is highly recommended that you use the latest versions of a supported browser in order to receive an optimal viewing experience. The following browsers are supported: Chrome, Edge (v80 and later), Firefox and Safari.